Holidays in the Military 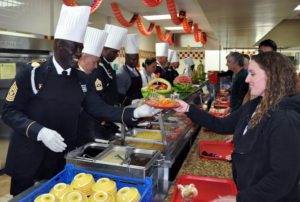 U.S. Army Command Sgt. Maj. Norriel Fahie, assigned to the Army Support Activity, serves Thanksgiving dinner to a member of Joint Task Force-Bravo in the dining facility at Soto Cano Air Base, Honduras, Nov. 28, 2013. Members of Joint Task Force-Bravo and their Honduran counterparts were treated to a Thanksgiving Day meal with all the trimmings in celebration of the holiday. Joint Task Force-Bravo leadership, as well as leaders from the Army Support Activity, Army Forces Battalion, Joint Security Forces, 612th Air Base Squadron, 1-228th Aviation Regiment, and Medical Element wore their dress uniforms and served the members of the task force. (DoD photo by Capt. Zach Anderson U.S. Air Force /Released)

Thanksgiving is actually a very big tradition in the military. It doesn’t matter whether you’re deployed, stationed overseas, or on a base in the Unites States; There is still a large Thanksgiving feast prepared for all military members. I have been deployed for three Thanksgivings, and for all of them, all the soldiers had a Thanksgiving meal prepared for us in the same tradition as if we were home. Every year, the officers serve the enlisted the Thanksgiving meal in the DFAC or chow hall. This is something that has been a tradition for many years, especially in the Army. It has never been looked at in any negative way by either officer or enlisted. The enlisted appreciate the officers doing this, and many earn a lot of respect through this tradition. It is actually something that the officers of the unit take a lot of pride in doing. To all the officers that have been there and made Thanksgiving meals for the enlisted, I offer my sincere gratitude and appreciation to you all and say thank you.

To some, due to being overseas, it may seem like just another day. You’re away from family or even on duty. Then for others, it’s a time to give thanks for what we have and have earned as well as a time to sit down with your soldiers and your chain of command to have a Thanksgiving meal with your extended family. When you deploy or even when you’re in the United States, this is your family. And you enjoy it as much as if you were at home with your own family. When you’re in the military, you become just as close to your brothers and sisters in the military as you do to your family back home. There is only one bad part about being deployed during Thanksgiving, especially in combat arms or other military MOS; You may still have to stand duty or even leave the base for a mission. I did in two out of three deployments, being EOD. I have had to leave base for missions several times on Thanksgiving. However, in all cases I still could sit down and have a worry-free Thanksgiving meal with my soldiers.

The Best Thanksgiving Meal in the Military

I would have to say the best Thanksgiving meal I’ve had while being in the military would go to Ft. Bliss, Texas. I am not saying that others were not filled with tradition or what you would normally have at home. I am just saying the people at Ft. Bliss went far beyond any expectations for a Thanksgiving meal. To the people of Ft. Bliss in 2014, thank you! 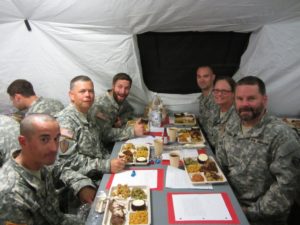 The USO on deployment is amazing. Normally due to time differences, the USO or MWR overseas is closed, so soldiers don’t get to watch the football live on most occasions. However, on Thanksgiving it stays open and is filled with soldiers watching the NFL games. Yes, it’s still usually early AM overseas, but we still have an opportunity to watch as if we were home. There are also free phone calls home, which are normally paid for by a civilian company for the whole day. To the companies that have spent countless dollars providing this to military members, thank you. We all appreciate it very much.

We may be deployed or in the United States. However, as soldiers and military members, we are still given the time celebrate holidays in the military by speaking to our families and having a great Thanksgiving meal no matter what our duty, our mission, or our rank. This is still a day the military sets aside some of the normal day-to-day routines and spends time together as a family. To the officers for the years they have dedicated themselves and spent countless hours serving Thanksgiving meals to enlisted members, I say thank you. Again, we all very much appreciate it and always will. To the civilians that work in bases in the United States and around the world on behalf of all military members, I say thank you for your dedication and making this day a holiday. We truly will always remember it. We hope that you have all had a Happy Thanksgiving from all of us here at Low VA Rates! As a military member, I will always be willing to stand and fight for this freedom and holiday we all so much enjoy.