VOICE OF A VETERAN


Military Discipline: Has It Changed?

The true life of the military has changed drastically over the years not only for the good but for the bad as well. The main reason is military discipline and the lack thereof! The days of disciplining a service member with on-the-spot push-ups, flutter kicks, etc. have all but come to a halt except in some select combat units. But even then, leaders must be sure that this discipline is not seen by other soldiers and is one-on-one with a supervisor, otherwise it’s going be considered demeaning or insensitive, and you as a leader are going to be accused of equal opportunity violations and more. It seems that we as leaders spend more time now in sensitivity training than we do in real training that gives us actual skills to stay alive in combat. 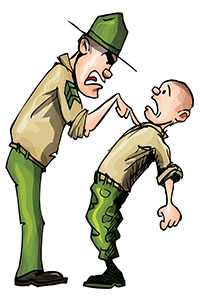 I highly doubt the enemy is concerned that you gave a service member enough time today on Skype, Face time, or Zombie Killers. If they did, we would simply win the war on terrorism with cell phones and the internet! Another huge problem I see nowadays as a leader is when you tell a junior to do something or have something done, their swift response is “why?” What happened to doing what you were told when you were told and how you were told? Where did this discipline and obedience go? It went out the window when sensitivity cards in boot camp arrived. You can no longer punish a service member the way you could back when I joined in 1990. Back then, there wasn’t any physical contact other than when I was in EOD school. The drill instructors told you to move your ass. And even this probably just offended somebody whose granny still folds their clothes or mommy wakes them at 2 pm for lunch because they stayed up all night playing Call of Duty. How about instead of playing it, live it. Quit complaining that you did not get enough sleep or food before a mission and hang up your phones and Xbox. I highly doubt the enemy cares how much you slept last night or today or that you made it to level 18 on Zombie Killers.

Lack of Military self Discipline and Disrespect Are Rising

The military has undergone a serious loss of discipline. If you ask most leaders, especially lower-level leaders, they will tell you that they have pretty much gotten used to the lack of respect shown by new and lower-level service members. It has become normal to accept their disrespect, lack of military self discipline and motivation. I am not saying that every new or young service member is like this. However, those who show a lack of discipline make up a far larger percentage.

I remember having to shine my boots and put military creases in all my uniforms including BDUs. Now I haven’t seen an iron in a barracks or shoe being polished in years. I do know the Navy and Marines still wear boots that are shined so I am going to count them out of that scenario. But still, we have accepted mediocrity simply due to laziness and have hurt ourselves by continuing to do so. There is one thing in life you can never get back, and since we aren’t supposed to discipline in public or with physical training unless we are doing PT or remedial PT, I urge all leaders starting at the lower level to bring discipline back and manage, teach, and train your subordinates. This may just save either your life, their lives, or someone else’s life whether it be in a combat situation or simply working in an office.