Many customs are used in the military that complement required procedures. Here are a few examples of military customs:

As military members, you should take pride in the customs we have and support them in every way.

Military Courtesies and How They Are Given 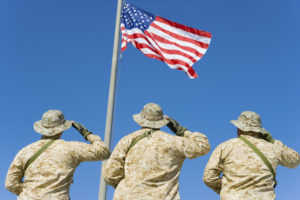 Courtesies are taught in order to maintain discipline and respect. This means that you should be polite and respectful when dealing with other people, both senior and junior. This develops good human relations when dealing with military and civilian people. The courtesies are there to show respect for rank, position, and experience to all who serve. The most common military courtesy is calling officers “sir” or “ma’am” and referring to any NCO as “sergeant” or “petty officer.” You should always end with “roger, sergeant” or “yes, petty officer.” The next would be senior NCOs calling “at ease” when they enter a building or room. When an officer enters a building or room, they should say “attention.” When you address a senior NCO, you should stand at parade rest until instructed to do otherwise. When you address an officer, you should stand at attention until instructed to do otherwise.

The hand salute is one that gets abused most often because both enlisted and officers seem to have this competition to see who is better, so both sides will try to avoid saluting. You should not participate in this so-called competition. Saluting isn’t just a show of rank or procedure; it is also a sign of respect and appreciation from both officer to enlisted and enlisted to officer as well as officer to officer. This should be done with pride. The hand salute should be done with one smooth, swift motion and should not be something that looks like you’re trying to cover your eye. The salute should be held until returned by seniors. The same goes for saluting the flag. If you don’t know how to salute, then look it up and practice in a mirror because some of the salutes I have seen over the years are pathetic. You should drop your salute in one motion and not slap your leg or make a gesture. The salute should be done with pride and respect. A courtesy is a show of one’s pride, professionalism, discipline, and military bearing.

How Military Customs and Courtesies are Used

In my opinion, military courtesies and traditions are sometimes a little too much. However, they should always be respected. There are many examples, but here are just a few traditions:

The military is full of time-honored traditions, and each unit member should be aware of and honor all of them. You should have pride and respect for the traditions in the military. These were developed by those long before you.

The Honor and Pride

Military courtesies and traditions create a sense of pride and respect for our nation, our flag, our military, and our way of life. Some can be used in civilian life as well as in the military. For example, you can definitely use sir or ma’am when talking to an elderly person or superior or person of authority, and you can also stand for the national anthem and Pledge of Allegiance. The show of respect for veterans and the freedom they have fought for, sacrificed for, and preserved should be done as a courtesy.